what the hard things are about living in China.  Is it living under a different form of government?  Not having a car? Being stared at and called "Foreigner"by people  on the streets?  Yes to all of these.
Is it the nostril-hair freezing cold? Government controlled heat?  Bureaucracy as an art  form? Yes,  yes, yes.
Or is the incredible challenge of learning Chinese?   Saying yes to things you don't  really want to do or no to things you do want to do?  Yes and yes.  Here is an hilarious example of the plethora of mistakes that you can make with one word "ma."  http://thecultureblend.blogspot.com/2011/10/you-want-birds-with-that-humbling.html
So yes, all those things are true.  But there might be one thing that you haven't considered.  Something that is quite serious, especially for women.

One thing that is hard is getting a good  hair cut.  You know how hard it is to explain to your hair dresser what you  want?   You know how you never look quite like how you thought you would (as in the picture of the movie star that you brought in?).  Well, imagine doing that in Chinese! With people who have never cut foreigner's hair?   Chinese hair tends to be thick and straight. Mine is thin and straight. Elisabeth's is curly-she had ringlets as a baby.  The texture is completely different.   Most  hairstylists in our fairly non-Western city have little experience in cutting foreigner hair. 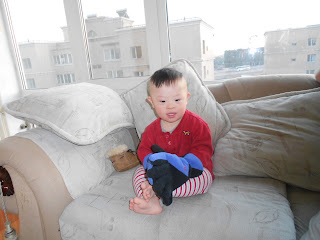 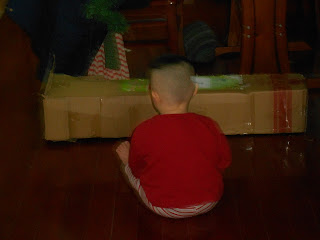 Our little guy goes with his ayi to her neighborhood barber for this stylish cut. We think it's adorable.  If he hasn't been to the barber in a while, the barber asks about him.
Paul has a barber and occasionally goes to the barber that cuts hair in the park.  Those haven't been his best hair cuts.
I have straight, short hair that is cut in what we call a Mom Bob.  Shorter in back,  longer in front etc.  Before we came to  China﻿,  I had it cut well, thinking that a stylist could just follow the lines.The first hair cut I had here was by an American Ex-pat who was a professional stylist. But I really wanted to practice language and culture and go to a Chinese salon. My friend Eva went to salon where she paid 15 RMB (less than $3.00) for a cut.  So I practiced my hair cut vocabulary with my teacher and rode my bike over to Cool  Cuts. I mumbled something about "jian toufa" and took my seat.  It was around lunch time and I hadn't eaten.   I thought it would be a quick wait and a quick cut.  No such thing. After two hours of blaring music and watching metro-sexual menwith green or purple hair stare at themselves in the mirror and primp,  I left. I did go back later and got a decent hair cut but the noise and musiccombined with difficult haircut language was just too much for me to handle.
Next we tried a place where another friend had good success.  The name of this place is "Camus" and this is where Elisabeth got the Mullet  of Despair. 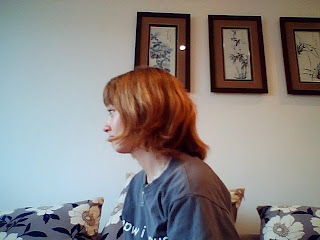 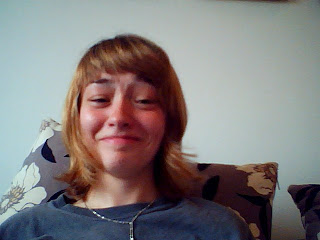 We didn't go back there.
Next, another friend (who has great hair) told us about a place near our local  Carre Four.  This place was a little more pricey. When you walk in they ask you if you want the 30, 48 or 68 RMB haircut.  This doesn't mean what kind of haircut you get.  It has to do with the level of experience of the haircutter.   We've actually gone and gotten our haircut at the same time and one of us has gotten the 30 RMB hair cut while the other has gotten the 48 kuai haircut. Same process, same amount of time.
One thing that is interesting is that cutting hair in China is very much a man's profession. We have never seen a woman cutting hair. When you walk in,  you put all your stuff in a  cabinet and it gets locked.  Then you get your hair washed by a young man or woman.  Then they take you to the stylist  (who is the important person) and you try to communicate what you want.  The stylist cuts your hair and then your hair gets washed again.  Then it is dried again and trimmed.  There is no tipping at all.
In China, people get their haircut pretty often.   So if you want a haircut, you really have to indicate how much you want cut.  In the US, I usually underemphasize how much I want cut.  In China, if  I don't measure an inch or more with my fingers, I get a little trim.
We had some funny experiences, too. Elisabeth got her hair cut and the guy asked her to pose for pictures with him. She stood up and he grabbed his phone, put his arm around her and took the picture. It happened so quickly that we couldn't really say yes or no and he meant no harm. But if you see Elisabeth in a picture with a Chinese guy with really stylish hair....that's not her boyfriend.
Another time, my hair was cut by one of the top guys.  He had blond hair with dark roots.   He wore a yellow shirt half buttoned up.  He mumbled at me in Chinese for almost the whole haircut, with the occasional "Shi ma?" I stopped listened after a while and just said  "Dui" when he said "Shi ma?"  "Shi ma"  is kind of the equivalent of "right?"   or "Do you agree?"  "Dui" means  "yes"  or basically you are giving your assent.  Who knows what I was agreeing to or with?
We've been pretty happy there but there were a few things that we didn't like.  The people were unfailingly kind and helpful.  But there was tons of cigarette smoking and our last few haircuts just weren't that good.  My last haircut is one of the worst I've ever gotten.  Elisabeth got her hair cut really short last summer in a cute pixie and it needs really precise styling.
So my same friend who told me about the above place told me about a guy named Raymond who actually came to her house and cut her hair.  He worked in a shop across the street from her apartment.  So we walked over last Sunday and got our hair washed and cut and washed and dried.  It was fabulous!  Elisabeth got her hair cut by Raymond. Except his name is Ramen  like the instant noodles but pronounced with a long A. I got my hair cut by "Gary" and it's one of the best cuts I've had. 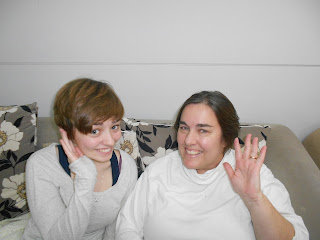 Elisabeth's hair looks cute and mine looks flat because I have hat hair since it's 0 degrees and I had to put my hat on when we left the salon. But trust me, it's a good cut. 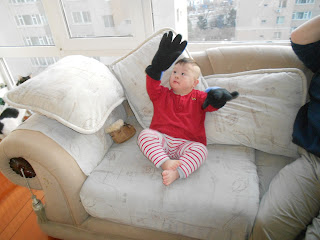 This picture has nothing to do with haircuts...just our little guy doing his version of jazz hands.
﻿
﻿
Posted by Sandy at Tuesday, December 20, 2011

I have haircut trauma here in Canada so I can only imagine the extra stress you face! You both look beautiful in that last picture :)

And sweet boy is just adorable :)

I remember Jeff getting a really bad haircut in France. I called it the ROTC haircut and it really was not attractive at all - especially with the cheesy first try mustache he was sporting at the time. Glad you had success. Elisabeth is so beautiful!

Love the jazz hands....lol. His face is looking so mature....little boyish instead of toddler! Cute!

You girls are looking stylish! I love hearing about your adventures in China. Wishing you a blessed and Merry Christmas!